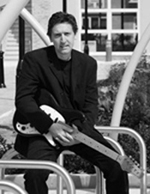 I’ve been working professionally as a guitarist, both teaching and performing, for around 20 years. I studied at Berklee College of Music in the US and have lived and worked in music in the Belgium, Canada and the UK.

In Brussels I worked as a guitar tutor at the British, International and European schools, as well as performing in a variety of formats and styles as guitarist and session player. I also travelled to France and Italy on various occasions, playing in bands of all shapes and sizes, covering most musical styles: jazz, funk, blues, rock, folk, Spanish and classical guitar. With my own group, Trio Clock I performed widely including at the Brussels Jazz Rally. I also wrote music for television and radio commercials and worked as an arranger.

I spent a year in Vancouver, Canada working with my brother, Simon as the Jarrett Brothers, an acoustic guitar duo. We performed regularly and recorded two CDs, Nylon & Steel and Acousticity. In Vancouver I was also resident guitar teacher at three musical instrument retailers.

Moving to London, I continued to teach, both privately and within schools, and formed a guitar duo with Victor Saumarez playing extensively in and around the capital, including at the Oris London International Jazz Festival. I am currently based in Guildford, Surrey; where I teach privately as well as at Lanesborough School and for Surrey Arts. I perform with the Akustiko Guitar Duo, with Mark Etherton’s Nchanted project, with function band jafuso blue and as a soloist.